My husband and I have been out of the blogging scene for awhile now. Along the way, we managed to accomplish wonderful things individually and together! Now that we're back into gaming and blogging, we have a lot to talk about. A lot has happened over the years for us and to us. Which is why I thought it would be fitting to start a weekly blog called Gamer Throwback for #ThrowbackThursday. I thought it would be a great way to introduce some old content for the first time!

With my first post, I'd like to share some Final Fantasy cupcakes I ordered for my husband. The fine girls @ a local company in my hometown called Oak Cliff Cupcake Co. took my silly idea and brought it to life in the most creative and fun way. First, I thought long and hard about what my husband would probably want without ever realizing it. I wanted him to have a "wow" reaction and to do that, I decided to pull inspiration from his favorite MMORPG, Final Fantasy XI. I then decided on the cactuar due to the simplicity of the design and I thought it could be replicated without too much of a hassle. We also had tons of fun playing together in Altepa desert being slaughtered by the cactuar's 1000 needles. Those were memorable times, so I thought it would make him smile to see those adorable yet deadly little enemies on his cupcakes. /run away /call for help!

The moogle on the other hand, looked like it would be more challenging but the girls made it happen. It required more color, more sculpting and, more finesse. I also chose the color of the icing for each and it couldn't have been better. These aren't the first time we've ordered video game themed cakes or cupcakes, and it won't be the last. Another of our favorites based off of FFXI was our wedding cake. We'll share that one later and come back and link it here when we do! 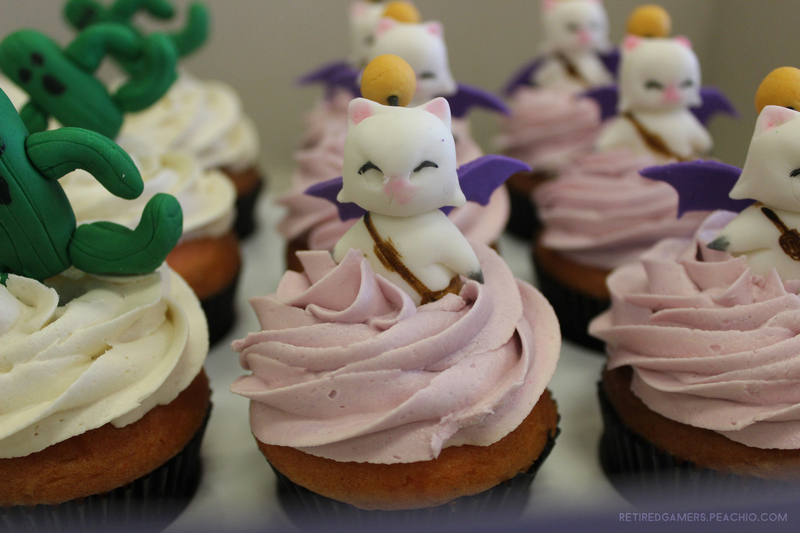